Although the library building is closed, curbside pickup is available, and you can return books to our bookdrops.

Images of nebulae, galaxies, eclipses, and lunar sequences by Ed Ting are on display in the library’s art gallery in July.

Meet the photographer at an artist’s reception at the library on Thursday, July 18, from 5:30 p.m. to 7 p.m. Plan to make an evening of it; Compaq Big Band will perform on the Library Plaza at 7 p.m.

Ting will also give a talk about how to use a telescope and how to recognize constellations at the library on Thursday, August 8, at 7 p.m. All these events are free and open to the public.

A latecomer to photography

He came to photography late in his astronomical career. He dabbled in manually guiding his single lens reflex camera at a large refractor in college but eventually gave

up, frustrated at the results. The advent of digital photography in the early 2000s changed everything. Suddenly amateurs could get results from their backyards that rivaled the world’s best professional images.

Astrophotography, Ting says, is the intersection of art and science. It demands the whole world of the participant, which helps explain why so few who try it are good at it. The astrophotographer must know the night sky; have an intimate understanding of telescopes, cameras, and computers; be proficient in Photoshop and Lightroom; have a good eye for composition, form, and color; be able to brave sub-freezing temperatures in the winter and vicious mosquitoes in the summer; and (perhaps above all) be lucky.

These days, while serious “terrestrial” photographers are rediscovering film and audiophiles are listening to vinyl again, “You will not find a single soul yearning for the days of film-based astrophotography,” Ting says. The night sky is an ideal subject for digital imaging. Take, for example, Ting’s image of the Horsehead Nebula, which is part of the exhibit. From photography’s beginning to only a generation ago, the Horsehead was considered a Holy Grail for amateur astronomers. “Yet today,” Ting says, “I am able to capture it on most any clear winter night from my driveway.”

Pleaides, or Seven Sisters, an open cluster in the constellation of Taurus 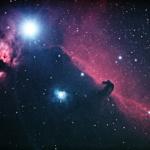 Nine Clear Nights on the Moon

Star Wars, the rise of Skywalker